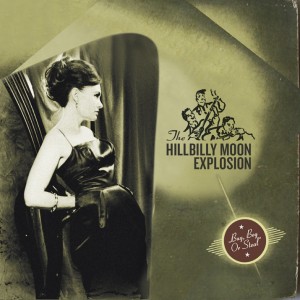 Rather than a clever title…I figured we’d be clear about it about front….simply b/c there isn’t much about today’s act in easily accessible web form.  Oh sure they have a band page (www.hillybillymoon.com) that borders on my 1st url, and a myspace page….but umm…I’m not ever going back there…so perhaps the person who picked this album will at some point want to say something about their background…but until then…all I can tell you is….

Listen to it here: http://grooveshark.com/#!/playlist/Hillbilly+Moon+Explosion+Buy+Beg+Or+Steal/7682744
Fun Fact:  As far as I can tell they don’t have a wiki page. And I’m too lazy to shift through the website for “facts”.  Imagine something cool.     / Seth: Fun Factoids: Founded in 1999 and based in Zurich, Switzerland.

Preconceptions:
Another one of my picks. Not my favorite Rockabilly jaunts from across the pond, but still a very compelling album. The woman’s voice draws you in, like a man with candy and a windowless van.

Favorite track/tracks:
Buy, Beg or Steal – This was the song that turned me on to the HME experience.
She Kicked Me to the Curb – Rowr.
My Love For Ever More – No wait… This was the song. I was all “TOM WAITS made a Rockabilly album with some French chick?!?!” Admittedly, I was way off, but if that thought process led me to bringing this album to Record Club then hand me another drink.

Least favorite track/tracks:
I had trouble thinking of the songs as separate. Instead, it just felt like a dance party for the length. That actually took a bit of it’s score. I really enjoyed the album, but it felt very repetitive and many of the riffs just sounded like they were recycled. There didn’t seem to be much experimenting happening in the album.

Hillbilly Moon Explosion-Beg, Buy or Steal (9/25)  This is not what I get down to. Ever. Some people do, and I can be friends with those people, but they will not convince me they have good taste in music. 1.9

Sounds like a rockabilly compilation. You sure this is all one band?
I guess this could be good if you’re a big rockabilly fan(I’m not an expert on the billies so if it’s technically a different billy or not really a billy at all, please excuse me), but it doesn’t interest me too much. Some generic jangly riffs, another reverb abusing female singer and an ok guy singer. The vocal variety did make it an easier pill to swallow, but there’s nothing I really want to come back to here.

After Listening: With Emanuela Hutter’s classy vocals, this is not your typical rockabilly rave-up. I should have known from the proper Oxford comma in the title.

Favorites: Since they are from Zurich , I wanted more non-English songs like the gorgeous Natascia. I hope they have Italian, French, and German songs on other albums.
I like the rough & smooth contrast in My Love for Evermore. The guest vocals are by Sparky Phillips, from the Cardiff psychobilly band Demented Are Go.

Least Favorites: She Kicked Me to the Curb sounds like they found it on the curb in front of the Reverend Horton Heat’s house. Enola Gay bombs. Someone had to say it. No, no one should have said it. Sorry.

Overall: Perhaps our Record Club season 3 has turned the corner. This is the second pick in a row that I have moved on to listen to the back catalog after the picked album. I am buying at lead two of their albums today.