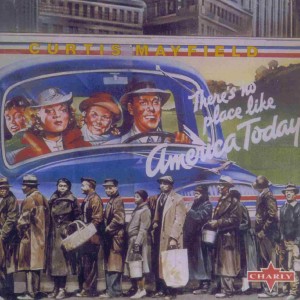 Listen to it here: http://grooveshark.com/#!/playlist/Curtis+Mayfield+There+s+No+Place+Like+America+Today/76826851

Read about Mayfield here: http://en.wikipedia.org/wiki/Curtis_Mayfield
Fun Facts: Curtis Mayfield was known for introducing social consciousness into African American music as well as R&B and wrote songs protesting social and political equality. He had written and recorded the soundtrack to the blaxploitation film Super Fly with The Impressions.[9] Super Fly is regarded as an all-time great that influenced many and truly invented a new style of modern black music. Just as the Civil Rights Act passed into law in 1964, his group The Impressions produced music that became the soundtrack to a summer of revolution. Black students sang their songs as they marched to jail or protested outside their universities, while King often marched to the peaceful sounds of Mayfield’s Keep On Pushing, People Get Ready and We’re A Winner. Mayfield had quickly become a civil rights hero.[10]

Preconceived Notions: I know Superfly. This should be the highlight of my week.

After Listening: Hrrm. That was nowhere near as punchy as I expected. I wanted the guy who taught Prince everything he knows.

Favorite Track: Blue Monday, Love to the People & Hard Times are what I wanted every song to sound like here.

Overall: This album was much more sluggish than I expected. The falsetto voice, funky wah-wah and bass, and occasional brass sting should add up to an old-school aural asswhoopin’, yet after seven long tracks many asses remain completely un-whooped. Billy Jack starts a slow build up that never pays off. When Seasons Change feels like I am watching leaves in early October. So in Love was the most interesting musically yet the least lyrically. Jesus… yeah. That happened. The last three tracks erase the earlier disappointments and bring the album score back out of the red. Ultimately, my opinion of this album suffers more from my preconceptions more than any actual flaws. I was expecting a bacon cheeseburger and bit into a grilled cheese.

Curtis Mayfield – There’s No Place Like America Today-MEK- This is another album that i wanted to love and didnt. I think its actually Al Green that i really like. Curtis is okayish. 2.88

Preconceived Notions: Superfly.  As my favorite sports writer Mr Tony Kornheiser would say…that’s it. That’s the list. What else has Mayfield done?  I couldn’t tell you, I really couldn’t tell you…I strongly suspect 70’s funk…but as there’s no Superfly on this album…could be anything…

After Listening: It’s nice to have such a warm recording on the 1st coldish day of the fall. And I don’t mean “warm” in an emotional sense, but in an analog sense – which is a great combo breaker  to the sterile or low fi recording streak the club has been on (and yes I realize we are experiencing the analog through a digital limited medium on grooveshark-it’s still different).  The analog is amazing in tandem with real bass lines played on the actual instrument- and this album features plenty of that.  This is a funk style in contrast to the P-funks of the world (coming up later in the RC season)-as a slower more reflective style of song construction and really can take advantage of the broader dynamic strokes of analog recording. We get the good and bad on this album of slower jams there are moments here when the repetition settles us into an emotionally invested state…whether that be a state of sympathy, or for me in many cases an almost stony contented mood.  However, there are times where the repetition only highlights stagnation and some silly rhyme schemes – seriously there are moments when the rhyme itself is not only bad, but it sticks out so much in the mix with an odd pause for emphasis that it all just sounds silly.  Curtis’ singing is also a bit of this yin and yang – at times his generally high registry deliveries seem to contrast perfectly with the bass driven arrangements; other times his voice crosses the falsetto line and sounds out of place and distracting.

Favorite Track: Billy Jack – A more mature Superfly with awesome wah pedal guitar work, and a pronounced simple bass line which sets the type of jam you could follow for a long long time.  It has the type of gritty feel I expected to find on so much more of this album, and while other tracks replicate the tempo – none of them seem to carry the same weight.

Least Favorite: When Seasons Change  Best and the worst to open the album, the 2nd track promptly takes what the 1st track did and diminishes it.  The slow groove here is a meandering non-impactful one, and combined with odd falsetto vocals it makes this a very long unpleasant listen.

Overall 3.9999 I might be giving this thing a few more points b/c I appreciate the style over the substance. I did really like to hear old school recordings again, so that was something.  This record is not really a stunner, to put it in RC context it didn’t seem to carry the same social commentary/emotional investment as a Marvin Gaye, and it didn’t seem to reach the same heights musically as a Stevie Wonder.  Still, Mayfield shows glimpses here of true emotional music combined with musicianship, and while I may have wanted it more, I can’t penalize him too much for what makes it on the recording.