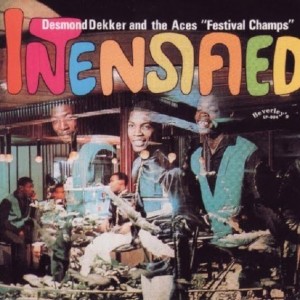 Today’s album is ska, reggae and English.  How versatile.  It does come from the year 1970 –so it makes it the 2nd album in a row we’ve listened to (or should have been listening to-more accurately) from the decade.

Listen to it here: http://grooveshark.com/#!/playlist/Desmond+Dekker+Intensified/75538715

Fun Facts:  Until 1967 Dekker’s songs were polite and conveyed respectable, mainstream messages. In that year, however, he appeared on Derrick Morgan’s “Tougher Than Tough”, which helped begin a trend of popular songs glamorizing the violent rude boy culture. Dekker’s own songs did not go to the extremes of many other popular tunes, though he did introduce lyrics that resonated with the rude boys starting with one of his best-known songs, “007 (Shanty Town)”. The song established Dekker as a rude boy icon and he also became an established hero in the United Kingdom’s mod scene.[citation needed] “007 (Shanty Town)” was a Top 15 hit in the UK, and Dekker toured that country with a posse of mods following him.[2]

Preconceptions: I love Desmond Dekker. I saw him in 1995 and again in 2005, almost exactly a year before his death. I don’t own this album but I am sure I have heard all it’s songs.

After listening: It is unfortunate that we are listening to this album for Record Club. I can only guess that it was a curiosity pick chosen at random from his discography.

What Sweet Nanny Goat: Ah It Mek is not in English, so don’t feel bad if you don’t understand it. Israelites is his top US song, Rude Boy Train references Shantytown which should have been on this album.

Him Running Belly Full: Sweet Music & Coconut Water are the filleriest of the filler.

Overall: Not a true album but a collection of Dekkers 1960s singles, Intensified is missing his two best songs and it leaves me wanting. The good songs are great and the bad songs are okay. You need to hear Honour Your Mother & Your Father and 007 Shantytown off the much superior 1992 Rhino release Rockin’ Steady.

Desmond Dekker & the Aces – Intensified
Preconceptions:
I’m assuming this is a Seth pick as I know who Dekker is and could only see this being a fave pick of his. I haven’t heard an entire album of his before, so I’m interested to see if there’s much of a difference between songs.
Mood:     Feh.
After Listening:
I think one of my biggest issues with ska/reggae is that I enjoy it, but only in small doses. It’s not that the music is bad, it’s just a very repetitive pattern/tempo.
Favorite track/tracks:
Ah It Mek – It is very possible that this is a favorite because it’s the first song.
Rude Boy Train – After a few tracks of not really bopping along to the music, this brought me back to dancing in my seat. Plus it said “007 is back on the scene” and I JUST saw Skyfall.
Tips of My Fingers – Love the reggae ballad.
Least favorite track/tracks:
Coconut Water
Overall (1-5 stars):     3

Desmond Dekker – I can dig this. I dont think its groundbreking enough for some, but you can rock to it, and really thats all i want in an album. 4.0

Preconceived Notions:   Ok let’s get my prejudice out of the way – I’m not a reggae fan, in fact in the large majority of cases – reggae, ska, dancehall, and any other number of reggae influenced musical forms – I deplore it.  But I’m doing the best to neutralize my bias with the fact that this is a sunny Friday, I have little work, and have a weekend of football goodness to look forward to-so, I have prepared myself the best I can for this.

After Listening:  If I’m inclined to enjoy any of reggae’s offerings-I’m starting to believe it has to be the older more basic sounding iterations – over say the Bob Marley 60-70’s, or the obnoxious 90’s ska scene.  I know this was released in 1970 and that songs were written on this from like 1969…but this sounds a lot older than that – like 50’s era, and that actually helps my appreciation for it. Seriously some of these songs sound like torch songs or 50’s ballads. That said, I can’t honestly say I really enjoy this album…tolerate is a good term.  Sure it has many of the same repetitive blandness that infects other reggae records I’ve been exposed to…but somehow they fit better in this 50’s-sounding style.  The beats aren’t as forefront which is important when they never change, and the vocals actually use some multiple part voicing and harmonies in places to break things up as well.

Favorite Track:  “Too much Too soon” – there’s some interesting guitar work on this one, and the jam section of this is dominated by that which is nice.

Least Favorite: “Intensified”  – true to its lyrics this one feels like it goes on for days, and not in a good way. Generic, repetitive, and ultimately annoying.

Overall  2.23  Look we all know I’m not the guy to come to for particularly insightful Reggae reviews.  Whatever charms and allures the genre offers, I usually can’t process them.  In fact, I may be giving this album somewhat of a pass simply b/c it doesn’t torture me the way I anticipated it would.   In other words my 2.3 is closer to a good or great album with the reggae handicap on my scale, than maybe a solid 3 on someone else’s.  I didn’t loathe this album, I also didn’t find anything on it I would gravitate toward.  A boring review, for what to me is a boring album.