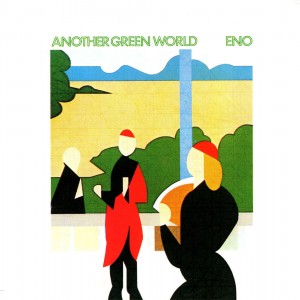 Click on the album to buy it on Amazon!

Today we’ve got a record from an artist who’s a musician, a composer, a record producer for bands like U2 & Talking Heads, a writer for both The Observer & Prospect Magazine, and a visual artist.  That’s a lot on one plate, but for our purposes today we’re just selecting one thing…an album of his from 1975.

Listen to it Here: http://grooveshark.com/#!/playlist/Brian+Eno+Another+Green+World/75538573
Read about the Album here:  http://en.wikipedia.org/wiki/Another_Green_World

Fun Facts: To create the lyrics, Eno would later play the backing tracks singing nonsense syllables to himself, then taking them and forming them into actual words, phrases and meaning.[14] This lyric-writing method was used for all his vocal-based recordings of the 1970s.[15] The tracks that do feature lyrics are in the same free-associative style as Eno’s previous albums.[4][13] The humour in the lyrics has been described as “less bizarre than gently whimsical and addled”.[13]

I’ve heard of Brian Eno before, but I don’t know that I have actually heard anything that he has done. Maybe I have. I have no idea. I’m constantly bombarded with songs from bands I don’t know (but eventually grow to love enough to listen to but not research).

Mood:     Slightly off and unsure as to why.

I don’t know why I was expecting to not hear vocals. I guess because my streaming music program has him listed in the ambient section I didn’t take into account there may be some tracks with vocalization. I just wasn’t in the mood to hear that though. All in all though, I’d listen to this while writing. The vocals aren’t dynamic enough to pull my attention to the lyrics. That is not a bad thing when looking for music to write to. That is actually a very good thing.

In Dark Trees/The Big Ship/Sombre Reptiles – These are the types of music that I typically write to. It’s creepy as hell, expressive, and you can get lost in it without being drawn to vocals.

For the most part, it was easy to fall into the album, so there wasn’t anything I really hated.

Brian Eno – Another Green World – I listened to this album a few times last year while listening to another “best of” list. Its pretty good. 3.7

Preconceived Notions:  This is a curiosity pick of mine.  As a rule I’m at least interested in what the minimalist composers of the world are doing – and sure dudes like Philip Glass or Steve Reich produce their share of duds, so too do they produce some important work.  Eno has been tough for me to classify, I know he’s not a strict minimalist nor is he completely ambient – and so for many years I was content to not really delve any deeper as I explored other artists that I had generally heard about (some of whom either had Eno has an influence or an as an actual record producer).  I chose this particular record b/c it’s supposed to mark a sort of change of direction for Eno from art rock to more electronic ambience.

After Listening:  I expected more experimentation on this record, but I’m not automatically disappointed that Eno didn’t completely go atonal or completely ambient.  In fact, there’s not much dissonance on the record at all…it’s almost harmlessly “quirky” in more dense moments.  I’d say the record carries an unexpected balance as well – there seems to be an equal portion of rock ideas and ambience melded together.  The instrumentation is sometimes tough to isolate and determine what is a synth vs say an actual viola , but the musicians here which include Phil Collins and Robert Fripp are undeniably top notch- and this includes Eno himself who contributes vocals, guitar, bass, keys…etc as an all encompassing performer.  On some of the more mellow affairs his subtle arrangements are the stuff of hardcore composition – a composer birthing his unique musical identity.  There are some throwaway tracks on the album as well when the mix of rock ideas and electronic music sort of wash each other out and leave you directionless, without getting you “lost” in the music.

Favorite Tracks :  Sky Saw – This will run a bit contrary to the rest of my critique of this album, but I think this track is fantastic.   Sure it is a rock based track 1st and foremost – with powerful bass lines (slick and aggressive), and a plodding rhythm with a bit of bombastic power.   But the disjointed synth work – which I’m sure won’t be everyone’s cup of tea, comes slicing through the work in such a violently disorienting way, you feel that it’s worth many re-listens to absorb all of it.

Little Fishes – Without knowing for certain, I assume this is the direction Eno’s work more and more resembled after this album.  It sounds more like what I expected this album to sound like – vast open musical space, some brief atonal scales – and it boils down to little more than a random sound collage.

Zawinut/Lava – Now here’s the minimalist side of Eno, simple melody-sparse arrangement, but at the same time deeply emotional if you mediate on it a little.  The gong swells are also impeccably placed in the backdrop.

Least Favorites:  The Big Ship – This is the 2nd electronic artist in a row to abuse a Hammond Organ.  Look I know they sound cool, but if you’re not going to give it much in the way of accompaniment besides some rather cheesy sounding synths, we’re gonna have problems, an attempt near the end with some electric guitar is made – but overall it’s a forgettable track.

St Elmo’s Fire – A silly little song, and not even Robert Fripp’s shredding can save it.

Overall 4.32  Ok Eno, you win…I’m intrigued, there’s a lot more basic pop and rock techniques on this album than I expected and in places the album sort of buckles to that and makes otherwise interesting ideas a little stale.   When done right – like on Sky Saw, it’s a formidable combo, but there are stretches of songs – like Big Ship and even Golden Hours where vocals and music seem content to just whittle away the time with nothing to say.   I’m a big fan of the more ambient stuff and electronic stuff and I can see how in 1975 this would’ve been even more impressive and certainly more experimental than it sounds now nearly 30 years later – so I can’t knock it any in that regard.  I’ll be actively checking out Eno’s progression from this album, and I can appreciate already its importance to his musical career.