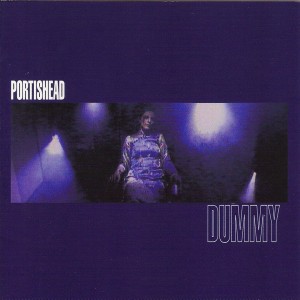 Click on the album to buy it on Amazon!

Today’s anglophile selection take their name from an actual town across the sea.  We are scheduled to listen to the debut album of the group released in the summer of 1994.

Listen to it here:  http://grooveshark.com/#!/playlist/Portishead+Dummy/74651130
Read about the group here: http://en.wikipedia.org/wiki/Portishead_%28band%29

Fun Facts: The album cover features a still from the band’s own short film To Kill a Dead Man.

Precon: Supposed to be a classic trip hop album. I don’t think I’ve heard it before.

Oh yeah definitely remember “Sour Times.” What the hell was it in?

“Wandering Star” feels a little monotonous with that bass line.

The slowed down “I’ll never fall in love” sample on “Biscuit” is kinda creepy.

“Glory Box” sounds awfully familiar too. I don’t remember these songs being on the radio, but I had to hear them somewhere.

Pretty even keel from start to finish. The recipe of a haunting, delicate voice over ominous beats is a fine one, but the high points aren’t very high. Maybe I’m just saying that because I feel like a swallowed a bottle of lithium. A good album for driving through a deserted city late at night.

Preconceived Notions:  I feel like I should have listened to this band in the 90s.  I didn’t, I don’t know why.  I was probably too busy listening to Tori Amos and Sarah McLachlan.  I’m worried that Portishead might be a lot like the Disney version of The Three Musketeers.  I saw it at the right time and it shaped my Chris O’Donnell crush for the rest of my life and I found Oliver Platt funny and charming.  If I had watched it first when I was 25, I would have, more than likely, found it not as entertaining.  Timing is a really important aspect of my appreciation for something, I’m finding.

As Listening: Glory Box-Ohhhhhhhhhh!!! This song!  I feel like I’ve heard this song a million times, and yet I couldn’t tell you what for.  It sounds like a song that should be played at the end of Ethan Hawke-directed movie.  The beginning of the hipster movement.  Oh I just checked, it was in The Craft.  Now everything makes sense.

After Listening: This seems like a band that’s clearly built around the singer’s voice, which is fine, but it limits what they can do.  Timing is indeed an important thing in music, and this feels like something from the 90s.  Her voice is has a beautiful tone to it, and it reminds me a lot of Sarah McLachlan actually, but these kinds of voices don’t really lend themselves to being all that interesting. They’re voices that are great for covers of songs, to lend a new take to a song, but there’s a monotone aspect to them too.  Or that could also be the staccato, sedative feel of the backing beats.  It feels like the world should be moving in slow motion to this track listing.  I guess, again, considering the time this came out, it might have sounded like a nice change from what the music scene was offering at the time.  But for me, a lot of the tracks all sounded the same and I couldn’t really get in too deep with any of them.  Overall, I was bored, but pleasantly bored; like dream walking bored, not angry bored.

Overall: 2.8-it was thoroughly average, but being more towards the pleasant side, I’ll go with a 2.8, slightly above strict middle.

Favorite-Glory Box, I suppose because it’s the one that’s most familiar.

Least Favorite-there were other kinds of songs on this album?

Preconceived Notions:   Downtempo….triphop? – but that’s about all I got, I realize that I should’ve checked in on the Portishead thing years and years ago, especially given that I enjoy groups like Massive Attack.  However, I’ve never been especially concerned with not focusing on them, and I get my chance today so no harm no foul.

After Listening:  Not as aggressive as Massive Attack’s collage of sound, in fact it’s not aggressive at all.  Just a vibe.  Parts of this are solid, parts of this remind me of bad James Bond style backing music….unfortunately none of it is surpassingly excellent in any way.  For a band willing to do their own thing there isn’t a lot of variation on the record, and I recognize some of that is the “style” – smooth vocals, looping beats, and very little dynamic shifts.  To their credit they are mood and scene evokers; the formula may be static but they commit to it enough to make it their own.  The instrumentation on the album is manipulated with in an inch of its life so that it’s often difficult to tell what you’re hearing, until you get an isolated guitar line here or there that pleasantly surprises you.

Favorite Track:  Mysterons – Although the album itself has little drastic variation, I sort of feel the opening track made me a promise the rest of the thing never lived up to – this track is the best of the band by a landslide.  The openness of the song is not just left to bland space, but rather as atmosphere for strange hip hop style infused thermin – and guitar vamps.  The music drops out at perfect times to highlight the most expressive singing found on the album.  I had hopes when listening that the band would take each of these positives further and further on each track – but, instead what I got was a gradual decrease.

Least Favorite Track – It’s a Fire – Part of an unimpressive middle section of this record – this is about as basically boring as it gets.  They dumped a Hammond Organ into this thing, but then they just let it dominate the song – I guess the idea was to let it compliment and interplay with the vocals…but it fails largely because that idea is so transparent there isn’t enough to the song otherwise to let the listener enjoy that relationship.  It’s a bland static concoction that could’ve been created by any of hundreds of acts.

Overall 3.13   I like a lot of various electronic music, so common criticisms about the “trip hop” genre like repetitiveness, or static presentation – aren’t huge issues to me.   Personally though, I lack some connection with this record – I think mainly because there’s a stretch of songs in the middle of the record that are just “there”….and they’re basically very watered down standard pop songs – sure they have electronic elements, but the way they’re arranged makes them take virtually no chances and no exploration of the music.  The vocals are nice enough, and the beats are mellow – but to me the only way most of this record would be something I would actively want to listen to – would be to alter my mood to just above the completely sedentary level.  In other words, with some stuff I can listen in any mood and then music takes me to a certain place – if it makes me mellow I enjoy being there when I get there – but with this record,  it’s not interesting enough to follow deep enough to let it work on you – and if you’re not in a very low key state already, you’re not gonna want to follow it there. Probably a great album to take a nap to, they have moments I enjoyed – but I personally can’t see choosing them over other groups who explore their sound a little more.

Preconceptions:  This was my pick, so it’s hard to put out preconceptions. It’s more of a curiosity pick of mine. I know everyone has heard that GAP jeans song and stuff like that, but I wanted to explore more of the album.

After Listening:  Okay. This has a great rhythm for the making of the loves, but a lot of it is something that you pretty much can ONLY listen to with the bumping of the nethers. I apologize for suggesting this when most of the album listening would be best done underwater.

Least favorite track/tracks: Strangers, It Could Be Sweet, Biscuit

Portishead – When i picked Portishead i actually meant to pick Aphex Twin. But this is coolish, great for a rainy day, if planet earth decides to have another one of those ever again. 2.6