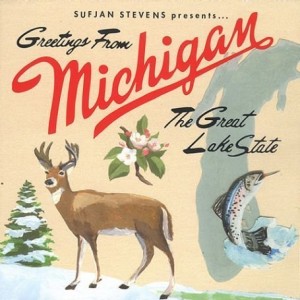 Click on the album art to buy on Amazon!

Today’s album is pretty perfect for our 150th (!!!) listen. Oh I’m not vouching for the music…yet, I’m just taking about a certain sense of symmetry as today we look at an artist from season 1 (# 22) Illinois that was really my 1st semi success surprise.  Today we get to listen to an earlier album of in the same series…yes, Mr Stevens is back, and this time he’s singing about his home state.

Read About Him here:  http://en.wikipedia.org/wiki/Sufjan_Stevens
Fun Facts:   Sufjan is an Arabic or Persian name[6] meaning “comes with a sword”.[7] It predates Islam and most famously belonged to Abu Sufyan, a figure from early Islamic history. The name was given to Stevens by the founder of Subud, an inter-faith spiritual community to which his parents belonged when he was born

Today’s album is pretty perfect for our 150th (!!!) listen. Oh I’m not vouching for the music…yet, I’m just taking about a certain sense of symmetry as today we look at an artist from season 1 (# 22) Illinois that was really my 1st semi success surprise.  Today we get to listen to an earlier album of in the same series…yes, Mr Stevens is back, and this time he’s singing about his home state.

Preconceived Notions:  Sufjan was a nice surprise for me during our 1st season.  I’d be lying if I said I’d listened to Illinois a lot since then, or that I ever really have plans putting it in the rotation.  However, it was nice to stumble across an artist here that I had no idea existed and did not hate.  In a weird way I feel like the bar is raised for this album since with everything out there – if we do another album by an artist I hope it’s worth it.

After Listening:  There’s a definite tone difference on this album from Illinois, and it takes a huge turn into a melancholy dirge in more than one place.  It makes sense, even back in 2003 when economic times were better – Detroit was already in full shutdown mode, and the auto industry was still falling behind and on the verge of its own collapse.  Flushing out these pensive or depressing thoughts is a huge task of instrumentation – trombone, trumpet, piano, xylophone, glockenspiel, flute, oboe, vibraphone, whistles….and on and on and on…  It’s a dense collage at times, but Sufjan in most cases employs a gentle touch and knows when to drop a piece down to its bare bones to get a message out.   On the “happier” or “more hopeful” album tracks it’s a mixed bag some of them still manage to keep the listener engaged, but more than once I found myself less interested in them – some of them had a slightly hokey feel.  I’m not a huge fan of his singing, but I will admit his interplay vocally with the female voices on this record provides a great warmth and welcome contrast to the drearier parts of the album.

Favorite Tracks: “For the Widows in Paradise, For the Fatherless in Ypsilanti” – Oh yeah there’s banjo on this record too, chalk up another instrument.  Its use here is basic, but beautiful –it’s essentially 4 chords and it leaves a nice open space for the female and male vocals.  There is also some excellently worked trumpet here as well.

Flint (For the Unemployed and Underpaid) – A sort of anti-hero opening track…slow and a little repetitive….with a depressive underpinning.  Its placement against the following more upbeat track immediately following provides more contrast and a clear indication that this will be a record of some breadth and depth.

Least Favorite: “Oh God, Where Are You Now? (In Pickeral Lake? Pigeon? Marquette? Mackinaw?)”  It’s not so much the individual song – even given its 9min length, but the last 4-5 tracks on here sort of ruin together in a generally soft depressing, odd folky vocal chorus, blend of “meh”.

Overall 4.12  I think I like this album more than I thought I would, and even more than Illinois,  in the sense that I appreciate the effort more.  There is a ton of musical effort on this record from ambient instrumental interludes, to orchestrated wonders, to simple arrangements.  At times, admittedly it’s a little too much, I don’t hear enough change throughout certain track sequences to distinguish them.  However overall this is an album that pushes some limits while still presenting creative and listenable material. A few of these tracks you’ll take with you when you leave, and the rest you won’t mind listening to when you come back and have forgotten about them.

Sufjan Stevens – Michigan
Preconceptions:
I know that you guys reviewed this artist for Season 1, but I didn’t get a chance to listen to all of those albums, so I have no idea what I’m in for. I’m assuming it’s rap?

After Listening:
Wow. That was totally not what I was expecting. Holy cats, this is beautiful. I really think I need to go back and listen to the other album. It’s hard for me to place what it sounds like without being repetitive and using the Zach Braff scale again. I think Braff would pimp the s**t  out of this album. It is very mellow and folksy without being nasal and overpoweringly whiny.

Favorite track/tracks:
Flint (For the Unemployed and Underpaid) – Gorgeously haunting.
For the Widows in Paradise, for the Fatherless in Ypsilanti – Love the banjo.
Detroit, Lift Up Your Weary Head! (Rebuild! Restore! Reconsider!) – Why do I have to love the ones with the really long titles?
Romulus – Beautiful melody. His voice is so captivating in this song.

Random Tangent:
My biggest beef with indie albums is that they always have the longest friggin titles for all of their songs. Look, I have ADHD. The idea that I am sitting through an entire album is a miracle in itself. When I have to look up an entire title of a song because it’s too friggin long to show up on the playlist, mayhaps it should be shortened.

Sufjan Stevens-Michigan- Bummer this isnt as good as Illinois, bummer he’s not doing states anymore. Bummer his head is so far up his own artistic ass. 3.4

Precon: I’ve heard a little and it sounded pretty much like Illinois, which is a good thing.

All the trademark Sufjan elements: piano, trumpet, banjo, singing like he’s about to cry.
“All Good Naysayers” is very reminiscent of “Come on! Feel the Illinoise!”
The electric guitar in “The Upper Peninsula” seems weirdly out of place.
Nobody does delicate like this guy. “Flint,” “Holland” and “Romulus” are good examples, all emotionally charged with a fragile beauty.
Don’t particularly like the tonal experiments at the end of some of the songs, most notably, “Detroit.”
Sleepy ending with those last two tracks.
Haven’t really heard anything from Sufjan I don’t like, even his most recent album, which is much different from the two we’ve heard in RC. He’s able to do a lot of stuff that sounds alike but doesn’t seem like outright regurgitation, just genuine creative expression.

Preconceived Notions: I absolutely loved two song on (Come on Feel the)Illinoise and overall quite liked the whole album, so I’m hopeful, that, unless there’s a radical change in Mr. Steven’s style, that I’ll fall for this one too.  As I said for Illinois, I just kind of like the idea of an album built around the theme of the states, I don’t know, maybe because it seems so organized and focused or maybe it’s just the ambition of a 50-album project.

Flint (For the Unemployed and the Underpaid)-feels grey and barren, mostly accomplished through the plodding, stark piano accompaniment, so mission accomplished Sufjan! (If I may be so bold as to use his familiar name).  I doubt that the Michigan Tourist Board is going to call up asking for the rights to this one.  The addition of the horns only serve to add to the funeral atmosphere.

For the Widows in Paradise- I like that this feels like a Civil War ballad of some sort.  The vocals on this are just so perfectly soft and gorgeous and although the end becomes just a little too repetitious for me, I like the creepiness of that final note.

Say Yes! To Michigan- The format of this song reminds me a lot of “Predatory Wasp…” but it feels more clinical and less intimate than that one did, which I think is why I feel like I want to really like it, but just can’t for some reason.  Although it does raise one question in my mind: “have any of his songs ever been on a Wes Anderson movie soundtrack?” because if not, that’s a wasted opportunity.

Tahquamenon Falls- for some reason this bell interlude reminded me of Philip Glass…can’t explain why or maybe it just reminds me of this environmental film “Riverglass” that we watched in one of my film classes.  Either way, I like it.

Detroit, Lift Up Your Weary Head – I like parts of this song, but the lyrics in the beginning are just too on the nose for me, I like my Sufjan a little more mystical and imaginative.  The instrumental arrangement I love.

Romulus- This is more like it.  Although this one is more on the depressive side, it’s still gorgeous and almost so private as to feel taboo, but the contrast between the sentiment and the sound produces something beautiful.
After Listening: I love his voice, I love the instruments he chooses to use, I think his arrangements are almost always wonderful, but some of these songs are difficult to listen to on a day when one is feeling as tired as I am.  Again, this is a guy with what I would describe as a cinematic approach to music.  The atmosphere is deliberate, the lyrics and delivery are dreamy (on the songs I like), and there is usually very little for me to complain about.  Although I did find this album less engaging than Come on Feel The Illinoise, it is enough of a reassurance of his style to quell any doubts I might have about other works he might put out.  I just like this stuff in my bones, well when he’s being all revelatory and artsy.  When it feels like he’s really stretching to just fit with the whole state theme, I’m less inspired, though I still like the idea.