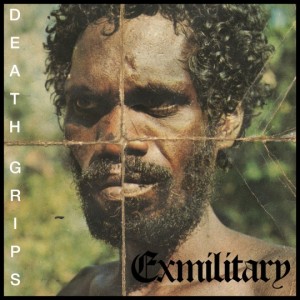 Today’s album doesn’t promise to carry that name recognition that will have you all running back – but it is a record club 1st. This morning we look at RC’s 1st ever mixtape recording. Pushed out for free on April 25th 2011….

Preconceptions: Mixtape? I hope it doesn’t have that creepy unrequited love vibe like the one I gave Shelly Nixon in sophomore year.

After Listening: Oh! “Mixtape” means “bad songs you made on a Macbook and gave away for free”.

Favorite Tracks: I would say the 49-second one, but I hated that one too.

Overall: Take the shittiest of silly rap & metal posturing and shout it over plodding and annoying music. The lyrics don’t flow as much as spray over beats that sound like a filthy catbox dropped down a staircase. The sampling only makes me wish the pick was an album by Bowie or Link Wray. It’s crispy bacon in a shit sandwich. If the Death Grips actually are ex-military, I hope they use the GI Bill to further their education and find a different field of work, say civil engineering or paleontology.
Aaaand we have Season 3’s first
FUCK THIS ALBUM!

Preconceptions:
I have no idea what I’m in for. By the band name I’m guessing it’s either rap or death metal.

After Listening:
I don’t quite know why I feel like I’m surprised, when I started this review saying that I had no idea what I was in for. It’s part crappy sample and part military rhyme feel to the lyrics. I think that the layering of vocals (or two people that have practiced nonstop) is detrimental to the album. Granted, the mixes themselves are horrible, but the rappers are actually compelling enough for me to wish that they had a bit more help with the production of this album.
There are things that are good in each song, but it seems like the opposite aspect is terrible. The transitions between each song is abhorrent.

Favorite track/tracks:
Spread Eagle – I liked the background but the shouting lyrics were terrible.
Klink – This sounds like one of the most put together songs in the entire album.

Least favorite track/tracks:
Guillotine – I liked the lyrical delivery, but the background was terrible.

Death Grips – Ex-Military- This blew my mind. I hated it on first listen. I thought it was “Cool” on second listen. I loved it, really loved it, every time after that. Pleasant surprise of the season. 4.5

Precon: Heard a couple of those songs Chris sent out a while back. Wasn’t too into it but liked that they were trying something different.

I already like this better without having to look at the guy’s spastic movements.
That Link Wray sample in “Spread Eagle” just doesn’t seem right but only the strumming part, the picking part is ok.
Every rap song now has that shoommm sound like a motorcycle going by you really fast. What’s the deal?
Not a huge fan of the way this guy raps. Sometimes he reminds me of Del, he must be from California, but other times it sounds like he’s doing that idiot voice you do when you’re imitating someone and trying to make them sound stupid. “You were all like ‘duh whadju say durrrr'” And I like most of the beats, so if the rapping was a little different this might really click with me. I do like the way he goes after it though. It’s an attempt to blow your head that just falls short.

Preconceived Notions: “Oy vey…really?!?!” Is my first thought, but since that thought occurred there’s been a debate in which I’ve felt like my aggression has come to the surface, so now I’m ready to go.  Maybe I’m in the right frame of mind for something that sounds, from name only, like it should be on the other side of the dateline from my comfort zone.

Oh, Guillotine was definitely sent around before.

After Listening
That wasn’t nearly as bad as I had anticipated it being.  I liked the production on it a lot more than most of the other of the genre that we’ve listened to.  I suppose it helps that they’re technically qualified as “Experimental” hip hop, which basically means they have more interesting samples and more actual instruments being played on the track.  Is it aggressive? Sure, they’re called Death Grips, people.  Is it any more violent or visceral than Dr. Octagon, for me on first listen, no.  I don’t think it’s anywhere near as polished as that, but there’s some promise here.  I was really quite distracted by the beats, so a lot of the lyrics I let slip past me.  I’ll probably listen again.  It’s worthy of another listen, despite the fact that on some tracks the repetition in chorus gave the feeling that it was more of a club music experiment than an underground guerilla music movement.

Favorite: I suppose the easy one to pick is Guillotine

Least Favorite: I Want It I Need It (Death Heated)- the most blatantly, almost obnoxiously offensive.  It just felt like the 6 year old kid who goes around yelling “shit” to see what kind of reaction they get from adults.

Preconceived Notions: I am not looking forward to this, of all musical genres experimental rap is probably the one where I check out mentally the earliest.  I’m not saying it can’t be done well, I’m saying too often it sounds like I could do it well – taking a good 15mins or so and my home computer-well the production anyway.  However, we’ll give this one a listen and see if succeeds my apprehensive standards.

After Listening:  While there’s little doubt you want to appreciate the concept of mixtapes- which are basically raw stream of consciousness like artist outputs – devoid of typical album pacing or hits, and usually definitively unique – there’s also the chance that the uneven format leaves you devoid of any interest.   This one sort of rode that fine line for me,  I can appreciate the abrasive beats and lyrics, but after awhile you’re just left going…”what the hell am I listening to?” and not b/c it’s so out there….but b/c you’ve sort of lost your place in the same general tone.   There are some breaks to the general stark backgrounds – a remix of the Pet Shops boys here, a nice guitar break down there, typical electronic noises scattered throughout.   But in the cumulative total experience I don’t identify with much of anything.

Favorites:  Takyon  (Death Yon)  It’s abrasive and static harmonically, but it does switch up the rhythm just enough to remain engaging- and at under 3mins most importantly doesn’t overstay its welcome.

Thru the Walls – Frantic, up-tempo loud and electronic – a perfect encapsulation of the whole “album”…it almost takes all of the pieces of the other tracks and cranks them up the whole way.   Realistically this entire “tape” could’ve been this song.

Least Favorite:  Culture Shock – it starts off promising enough with some harmonic elements, but quickly dissolves into one long-and I mean long string of basically extended ways to build up to “f*ck yourself” as a tagline over and over.  The last 2 minutes of this thing feel like 20.

Overall 2.69 Like many other exposures to this type of creation this thing wore out its welcome before it was half over.   I can’t help thinking – “why don’t these guys just mix this stuff and share it with their friends?”   Then I remember there is an audience for this, and I’m just not it.  Stylistically, it has some elements I really enjoy – moments where the aggression and the electronics and everything simmer up right…but I just realize that for me the sparser moments of the mix where it’s just F bombs and beats well they have me wondering how much more I can take.  It may be my naivety but I don’t see anything special about this recording – it has a lot of abrasive and a bit of experimental elements but for me not enough of the latter.  I want to stress that I do see the merit of mixtapes or underground recordings etc….and if you already identify with the artists that produce them you’ll probably like more of what you find there than what you don’t, it’s just as an introduction to a group they are not the easiest things to digest – or tolerate in their more uneven moments.

Preconceptions: Got a name like a metal band, but its hip hop or something. Sounds aggressive.

After Listening: I like the sort of hardcore pep rally quality that this group has. I imagine in my head a lot of hopping around and fist pumping (not in the Jersey Shore sense). Its definitely pretty aggressive and I like the production on most of the songs, although some just kind of bored me. Overall I’d say I’m glad I was exposed to this.

Least: Lord of the Game