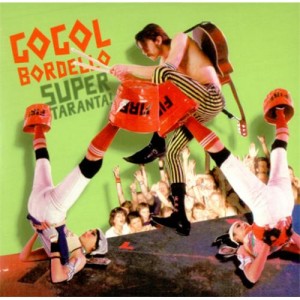 This morning marks our 1st ever official guest choice selection.

Selected by wife of our own Seth – Vicki introduces today’s group thusly:

I discovered this band in the movie Wristcutters, A Love Story which features the song “Through the Roof and Underground” prominently throughout. I was immediatly hooked as they sound like no band I’ve heard before, except maybe a Ukranian Pogues cover band. They are the band I’d most like to see live.

Listen to it here: http://grooveshark.com/#!/playlist/Gogol+Bordello+Super+Taranta/74748765
Read about the band here:
http://en.wikipedia.org/wiki/Gogol_Bordello

Fun Facts: “Gogol” comes from the name Nikolai Gogol. As one of the most influential writers in Ukrainian and Russian literature, Gogol paved the way for the likes of Kafka and Dostoyevsky. He also serves as an ideological influence for the band because he “smuggled” Ukrainian culture into Russian society, which Gogol Bordello intends to do with Gypsy/ East-European music in the English-speaking world

Preconceptions:
I have heard the album before, but never from start to finish. Somehow I know that I have heard all of these songs before, but I cannot tell you which ones are on the album without actually reading the tracklist. With Gogol Bordello, I have a tendency of just letting it go. I’m a fan of music which I lovingly refer to as “Gypsy f**king music”. OH! I was actually educated recently from my friend Molly that Gypsy is a derogatory term for those of Romany heritage. That, and I think there was a show on A&E that Ralph Macchio produced having to do with a Romany family. I watched the strangest things during my travels.

After Listening:
This genre of music always lifts my spirits and make me want to shake my hindquarters in festive fashion. It’s the Eastern European in me. I just want to dance in circles and drink and smile and kiss cheeks and dance some more.

Favorite track/tracks:
Zina-Marina – I’m a sucker for a good base line and cheesy lyrics that pour out of Eugene Hütz’s mouth.
Dub the Frequencies of Love – I absolutely love the line “davaj tovarisch, like tovarisch would” in Dogs Were Barking (from Gypsy Punks: Underdog World Strike), so it was great to hear that rhythm in more than one song.
American Wedding – This was supposed to be one of the last songs at my friend’s wedding and they neglected to play it. It’s okay though, we still rock out to it.

Least favorite track/tracks:
My Strange Uncles From Abroad – If I have to pick one, this is it.

GoGol Bordello-Super Taranta!- I went through a weird Gogol Bordello phase. I’m out of it now. Start wearing purple is awesome once in awhile but 10 or more songs is overkill. 2.7

Precon: I love “Start Wearing Purple,” and I think the lead singer played the kooky (surprise) European guy in some indie movie where Elijah Wood wears thick glasses and travels the European countryside in search of his Jewish roots. I’m concerned that part of their appeal may be a novelty factor that will wear thin over the course of an album. Fingers crossed.

Well part of what I feared came true, in that it quickly starts to feel like the singer’s just exploiting a hook a la Yakov Smirnoff, but where his own sheer enthusiasm couldn’t make up for this, which it often did, the music picked up the rest of the slack. Maybe he’s doing a character. Lines like, “Come on man, is that real so much to ask?” leave me asking, “Is he for really?” But you could say a lot of people do characters to some degree so maybe I shouldn’t hold it against him. Overall it’s a fun, entertaining record. I like the many instruments, especially the violin, and styles they play with. And of course, the Beckett reference, “I can’t go on, I will go on.” There also seemed to be a kind of psychotic meltdown with the last few songs, so that was interesting. Easily the best gypsy rock album of the year.

Preconceived Notions: I’ve heard Wonderlust King several times and seen Wristcutters: A Love Story (the impetus for the choosing of this album) and I like both of them. That being said, I’m expecting something with a lot more accordion and a lot more Russian than I would normally choose for myself.

“Zina-Marina” after the melodic joy of the first two songs, this one just sounds downright creepy. The first two songs sound like something you’d run in to if you were at a rural Russian wedding. This sounds like something you’d follow down a back alley to a seedy bar where people are missing teeth and bathing isn’t necessarily required; alternatively known as a David Lynch club. But there are so many instruments being played so well that you can’t dismiss it. The worrisome laugh at the end is kind of wonderful.

“Supertheory of Supereverything” the lyrics are so intricate, but I can’t help but laughing because it sounds like this is sung by Bartok, the animated bat in Anastasia.

“Suddenly (I Miss Carpaty)” something about this reminds me of something that would be on a Tim Burton movie that took place in Russia. Like the animated version of Crime and Punishment. This is the song when animated Johnny Depp is running through the streets contemplating committing the crime.

After Listening: That was so much more fun than I was prepared for. A lot of the songs kind of feel like a submissive descent into madness, but then again, what would you expect from a Ukranian living in New York? Also, it must be said, he wears that mustache wonderfully. It’s theatrical and filled to the brim with sounds that should seem overwhelming, but never become obnoxious. It all goes together so well. I love the sheer amount of strings and horns on this album, and the accordion, of course. The one thing that’s extremely clear to me is that, if I could afford it, these guys would be the band at my wedding…or the band that Bertha Rochester hears in her mind all day long when she’s locked away in her tower of Thornfield. Also, I would imagine that going to see these guys live would be the most fun and exhaustive concert-going experience I could ever have. That said, they’ll be in Atlantic City on August 10th and Brooklyn on September 8th

Preconceived Notions: I know these dudes have come up on Singles days from time to time, I don’t remember much about them – but the name and the style give me hope. Nothing is more badass than Eastern European/Balkan gispy style music when it’s in full swing – I’m expecting some ultra sick playing and some humor on here.

After Listening: Oh, it’s that kind of gispy music. Gispy style music with more of a modern song construction….well m*%%#$@er F*&k it. Ok breathe, breathe…let’s examine it on its own merits. The energy on here is solid, you can tell they are really having fun on the record, and I’ll admit the singer’s imperfect English phrasing adds a little bit of charm. Instrumentation is also solid on here – accordion, truba, violin etc…all the pieces for something special are there. But I am simply not moved by much of the music on this record – it doesn’t sound much more talented or intriguing than music at a local fair with a decent brass polka band. I wouldn’t dare question their authenticity as their biography speaks to their heritage, but I feel like they have a bit of a watered down vibe.

Favorite Tracks: “Suddenly (I miss Carpaty)” – Although in no way shape or form do I appreciate the attempt to ram electric guitar into this track the rest of the music on here is closer to what I would’ve liked to see from the band more consistently. Great strings and accordion at a blistering pace.

“Dub The Frequencies of Love” – A nice eastern melody is really toyed with and explored in this song, this is probably their best blending of influences as the guitars and rock elements play off of the melody instead of dominating the action.

Least Favorite: “Zina – Marina” Basically a this is a pop punk song with just a shade of eastern flavor and that’s mainly due to instrumentation choices. Pretty weak and at least 2 mins longer than it needs to be…I find myself thinking this about a lot of the tracks here.

Overall 3.91 This one gets points for trying: they do bring a few elements together in what I would assume is a unique concoction (I haven’t heard anyone else try a punk/gispy meld). As someone who will always appreciate the music of a piece as paramount – I have to say it falls a bit flat. It’s fun at times – numerous drinking song vibes, and flashy at times – but to me the total product feels a little forced as if somehow they’re working with restraints in order to fit the modern elements into their works. It’s worth a listen to check out- even if it leaves you wanting a little.

Preconceptions: It’s the wife’s pick and one of the albums we agree on.

Overall: Raucous and poetic, Super Taranta! is a drunken midnight soapbox derby ride through Brooklyn. While not a vodka or herring fan, I would happily attend any wedding that had this band. It’s copious drinking and frantic dancing, followed by a walk outside where the sheen of perspiration on your skin will instantly freeze into a hard shell that will alloy you to slip out of the grasping fingers of the secret police.
It’s amazing to get clever lyrics in a second language, which makes me wonder what I am missing in the smattering of Ukranian on the album.