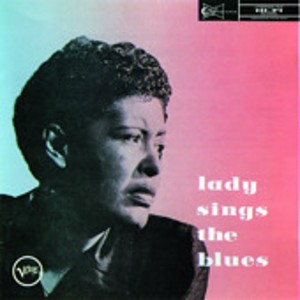 Today’s selection also saw its artist produce their autobiography with the same title. And it’s quite a story all told, although it’s not my aim to retell it here. Nope – just the basics, and so here are the basics – you get a legendary jazz singer with an album taped from a series of takes in the mid 50’s.

Listen to it here: http://grooveshark.com/#!/playlist/Billie+Holiday+Lady+Sings/74747746
Read about her career here: http://en.wikipedia.org/wiki/Billie_Holiday

One year ago – The Vapors –New Clear Days

Fun Facts: Gilbert Millstein of The New York Times, who had been the narrator at Billie Holiday’s 1956 Carnegie Hall concerts and had partly written the sleeve notes for the album The Essential Billie Holiday (see above), described her death in these same 1961-dated sleeve notes:

Billie Holiday died in the Metropolitan Hospital, New York, on Friday, July 17, 1959, in the bed in which she had been arrested for illegal possession of narcotics a little more than a month before, as she lay mortally ill; in the room from which a police guard had been removed – by court order – only a few hours before her death, which, like her life, was disorderly and pitiful. She had been strikingly beautiful, but she was wasted physically to a small, grotesque caricature of herself. The worms of every kind of excess – drugs were only one – had eaten her … The likelihood exists that among the last thoughts of this cynical, sentimental, profane, generous and greatly talented woman of 44 was the belief that she was to be arraigned the following morning. She would have been, eventually, although possibly not that quickly. In any case, she removed herself finally from the jurisdiction of any court here below.

Preconceived Notions: I was looking forward to this album, but not in the traditional “joyful” sense. I have never really liked nor appreciated Billie all that much, and honestly of the stuff I have heard it’s always been boring and flat. However, in the RC spirit delving into a full album may help me unravel a bit of why Holiday is mentioned alongside of Ella, Etta, Lena, Shelia (Jordan) and other of the female jazz vocalists of “legend”.

After Listening: I still have a bit of mixed feelings about this album. You can clearly tell that by this recording Holiday’s voice is starting to decline – how much is difficult to say as earlier recordings are worse in sound quality, and so these clearer recordings might be highlighting deficiencies that were coming on throughout her career. This is not to suggest that listening to Holiday is an unpleasant experience – her voice in any condition is perfectly complimentarily for the style presented on this record and the “brokenness” of both her mood and her actual physical voice highlight the slower and somber pieces. For me, where the record has reservations is in the musical deliveries….these represent a collection of largely simple torch songs and sometimes Holiday’s delivery is not intriguing enough to hold my interest over a static background.

Favorite Track: “Strange Fruit” – From a musical perspective one of the most detailed backing tracks on the album with the blaring horns – in a faux almost Spanish manner. And of course the subject matter – the lynching of African Americans is a stark and haunting list of images “strange fruit for the crows to pluck”…The only response is to absorb all of it – like the aftermath of a terrible accident, and just move on.

Least Favorite Track: “ I must have that man” – Like too many of the songs on this album Holiday’s broken voice is an ill match for the style of this song. Lyrically this is easily an autobiographical piece – Holiday’s addiction to abusive relationships – but it falls rather flat without that context. It becomes nearly a school girl’s meditation on love, and just falls apart.

Overall 3.87 I never really enjoyed more than a song or two from Holiday and finally listening to an entire record hasn’t done much to change that view. She’s earned her place in jazz greats history-and fans of the old ballad format would likely never be disappointed in any of her output, but to me I see an artist to be respected if not one I enjoy all that much. Just as there was a Basie to my preference of Ellington, Holliday was to my preference of Ella – a competent and unique performer – but one that fell a little short of the top level of innovation and creation particularly in the actual music of the pieces. It’s impossible to say where Holiday would’ve gone if she hadn’t ruined her voice (and her life) with drugs and booze, and ironically where I enjoy her music most is in the background on a cold gray November afternoon sipping scotch somewhere. And in those moments- her broken voice is a welcome friend, even if most days for me I could do without it.

Preconceptions: I am apprehensive, as I haven’t heard much Billie Holiday. I am afraid if I don’t care for it, my musical opinions will lose any credibility.

After Listening: My concerns seem to be baseless.

Best tracks: With the sad tone and matter-of-fact description of it’s grotesque subject, Strange Fruit is more effective than an angrier song could have been. The listener is left emotionally devastated. The jauntier tempo of Love Me or Leave Me makes that track stand out in a group of great songs.

Overall: With a unique but not showy voice, Holiday stands out from her contemporaries and successors. Is it too old-man-y to say American popular music has gone in the crapper since this album? It’s nott fair that Rhiana and Carrie Underwood is the best we can come up with. Was Billie Holiday a big deal in her time or was she better regarded by later generations? Perhaps some kid has an unwatched YouTube channel out their with our era’s musical legacy. Now get off my lawn.

Preconceptions:
I have listened to Billie Holiday quite a bit. I think, perhaps, I will work on a tiny hat as I listen to this. I don’t know if I’ll able to pick a least favorite. I absolutely love this woman’s voice. It’s like being kicked in the face with velvet.

After Listening:
Yep. Love it.

Favorite track/tracks:
Say It Isn’t So – Such an upbeat rhythm for depressing lyrics.
I’ve Got My Love to Keep Me Warm – Her voice is lovely, but this is a favorite for the accompaniment. It’s absolutely gorgeous.
Trav’lin Light – Perfection.

Least favorite track/tracks:
God Bless The Child – The fifteen minute session where she’s warming up is only worth listening to when you hear her bad mouthing someone. Then it’s just repetitive and crankifying.

Billie Holiday – Lady Sings the Blues – I kind of thought i’d like this better. Maybe it sounds better when you’re listening to it via an AM radio in a hot house with no A/C somewhere south of the Mason Dixon Line. 3.0

Preconceived Notions- Ms. Holiday is one of those people who have reached mythic proportions within their field, like Babe Ruth or Earnest Hemingway. Figures whose names are larger than life and synonymous with some sort of peak of perfection, but whom I’ve always just accepted as legend. I feel as if I like Billie Holiday because I’m supposed to like Billie Holiday, because what ISN’T there to like? I’ve never listened to this album, but I like this era of music. I like that there was a full arrangement with an accompanying band, or if you were lucky, orchestra, and a truly capable voice, but I really have to be able to sit down and listen, so it’s more of a focus exercise with this kind of music, not just something to bob my head to. I don’t know if it’ll be a revelation, but I’m finally sitting down to listen, so we’ll see.

As Listening: I wish that the recording was crisper. The band sounds muted

Strange Fruit-I like the almost Gothic feel to this. Like what I imagine Lestat would listen to every day at 6pm as the sun sets outside of his boarded up New Orleans mansion.

No Good Man-this is pretty much what you think of when you think of Billie Holiday, that note of winsome longing.

Too Marvelous for Words-sounds far too snappy to be included on this album, I like it.

I Thought About You-Her voice sounds raspier here, a little lower register. I like this tone a whole lot better.

After Listening: Billie Holiday is one of those singers that I want to like MORE than I actually do. When it comes down to it, I think I prefer the lower, deeper tones of Nina Simone or Etta James. A lot of this album I just hear as there being SOMETHING that isn’t exactly my cup of tea, but the songs are so atmospheric and the one thing that has to be said is that Holiday ’s voice IS unique. There’s a frailty to it, that can make you understand heartbreak and I think it’s that connection the people like more than her actual voice.

Favorites: Strange Fruit & I Thought About You

Overall: 3.4- it doesn’t really rock the boat, but it makes you happy enough to just be floating along.