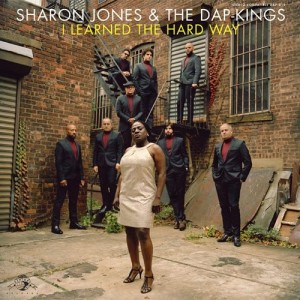 Sharon Jones and the Dap Kings – I Learned the Hard Way

Listen to it here: http://grooveshark.com/#!/playlist/Sharon+Jones+and+The+Dap+Kings+I+Learned+The+Hard+Way/66798640
Read about the album here: http://en.wikipedia.org/wiki/I_Learned_the_Hard_Way

Fun Facts: The Dap-Kings were then hired as session musicians on a number of projects associated with New York based DJ/producer/recording artist Mark Ronson. Most notable of these is their extensive inclusion and somewhat unheralded contribution to Amy Winehouse’s album Back to Black (2006). Six of the album’s eleven tracks feature various members of the Dap-Kings with two notable hits from the album, “Rehab” and “You Know I’m No Good”, extensively featuring the Dap-Kings