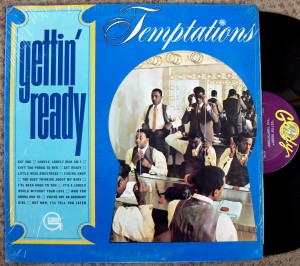 Listen to it here: http://grooveshark.com/#!/playlist/Temptations+Gettin+Ready/66608970
Read about them here: http://en.wikipedia.org/wiki/The_Temptations

Fun Facts: Oh there are tons of facts about them and at least one tv mini series.  So let’s just pick one specifically about this album…

Norman Whitfield had requested the opportunity to write for the group and in 1966, Berry Gordy promised him that if Robinson’s “Get Ready”, with Eddie Kendricks on lead, failed to chart in the Top 20, Whitfield would be allowed to produce the next song. “Get Ready” subsequently missed its mark, and Gordy issued the Whitfield-produced “Ain’t Too Proud to Beg”, with David Ruffin on lead, as the next single. “Ain’t Too Proud to Beg” outperformed “Get Ready” on the Billboard charts, and Whitfield became the Temptations’ new main producer. He began pulling the group away from the ballad-based productions espoused by Robinson, toward a harder-edged and brass-heavy soul sound reminiscent of James Brown.