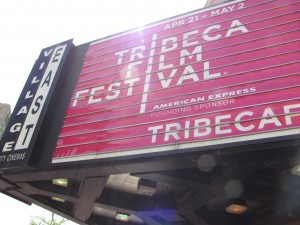 I had the opportunity to view a showing of Meskada at the Tribeca Film Festival on April 24, 2010

Review: Meskada (2010)
The movie begins with a home invasion going terribly wrong. The resulting murder of a child rocks the town of Hilliard. Nick Stahl plays Noah Cordin, a detective assigned to investigate. Cordin and Meskada county detective Leslie Spencer (played by Rachel Nichols) discover a vague clue that leads Noah back to his hometown of Caswell.
He reconnects with his upbringing and the friends he had left behind. In the time that Noah has been gone, his hometown has fallen to poor financial times. Many of the townsfolk travel outside of the city to find whatever work they can. However, a manufacturer is planning to build a plant within Caswell, bringing much needed employment into the downtrodden town.
With the assistance of a Caswell officer and a local bar owner, Noah begins his investigation. His gut tells him that one of the men he had questioned was responsible, but without adequate evidence he returns to Hilliard. The mother of the murdered child (Allison Connor played by Laura Benanti) is a member of the Meskada County Board of Commissioners and after the mention of the culprit possibly living in Caswell, complications arise with the manufacturing plant being built.
Many inhabitants of Caswell begin their own investigation as to who the murderer is. They intend to turn the culprit into the authorities to get the plant planning back on track.
It was surprising how real it all felt. The story wasn’t set in an actual town/county and that worked to writer/director Josh Sternfeld‘s advantage. The unforgiveable murder of a child affects everyone in the community and it’s surrounding areas. There was even a moment in Det. Noah Cordin’s kitchen with his son Zack (played by Max Antisell) that shows that even the authorities were shaken to the core by this gruesome act of violence. The performance by Laura Benanti was staggering.
Sternfeld’s characters were so real and easy to relate to because they were beautifully flawed. Allison Connor wasn’t above using her position of power to get what she wanted. Nat Collins (played by Grace Gummer) was either completely devoted to her town and those in it, or incredibly naive. Dennis Burrows (played by Norman Reedus) was devious and underhanded, but his one redeeming quality was his love for his son. Shane Loakin (played by Jonathan Tucker) was so emotionally torn. He was tortured by his involvement in the destruction of a family. Tucker’s performance was quite possibly the most powerful in the movie.
Even Detective Noah Cordin was chalk full of flaws. His personal relationships suffered because of his desire to solve the case. His faith in humanity was questioned and his reactions were strong. His propensity for violence showed that even those working for the community have it in them to commit acts similar to those they mete out justice for.
We had arrived just as the movie started, so we were sitting in the front of the theater. I am sure there are things that I had missed, but I will not hesitate to see this movie again were it to come to my town. 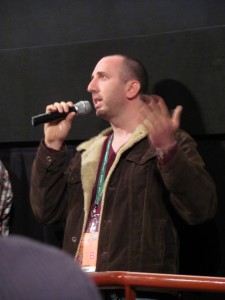 Writer/Director Josh Sternfeld steps out for a brief Q&A after the film.