As much as I spouted my excitement for the prospect of the Walking Dead in a previous post… I remember the butterflies in my stomach even up to ten minutes before the pilot aired on Halloween. How odd is that? I guess because I had already become so accustomed to the long standing comic/graphic novel/compilation by Robert Kirkman, I was worried that it would be lost in translation. The story had always been about truths in human nature and how people react differently to the same issues. I was worried it would be more about the zombies.

I’ll just hold my hands up in defeat and admit that I was ridiculous to doubt Frank Darabont. I had seen the four minute teaser that aired at ComiCon this year and I should have just let it infect me. But there was still this nagging tug in the back of my head. 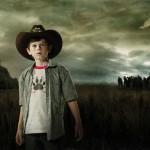 What if they miscast one of my favorite characters? They cast eleven year old Chandler Riggs to play Carl Grimes who at the start of the comic was around seven years old obsessed with all things cowboy. (Guess what? They didn’t. I absolutely ADORE Chandler in this role. I am very happy with the decision to make him older.)

*UPDATE* Chandler’s pop sent me a note via formspring. Chandler was 10 when they started shooting and turned 11 in June.

The pilot calmed many of my fears. The delicacy of the shots, the lack of music for the majority of it… Brilliance. Nothing sets you on edge during anything filmed like silence does. You listen and listen for a clue of what’s to come and before long you find that you have scooted up to the front of your seat and are perilously close to falling off. The spanning cinematic quality shots elevate the show to an entirely different echelon than most television programs.

It is obvious that the crew involved in the visual aspect of the show were all well versed in the comic panels. The long distance shot of Rick riding down the deserted highway and the moment that he fell off of his horse in Atlanta, it was dead on.

Frank probably went through a lot of shit from the fans of Kirkman’s world when the announcement of two new characters spread like wildfire.

It’s probably common knowledge that I have a schoolgirl crush on Norman Reedus. When I read the brief synopsis of Daryl Dixon, I knew he’d do the role proud. Reedus can play a violent jerkface even though he’s a big ol’ teddy bear (Shut it Norm. You are. Let’s hug.) I was excited that he was added to the cast, but since the character hadn’t been introduced he was getting a trial by fire. The new characters are typically the ones in the dirty wifebeater with a red target drawn on the back of their heads.

I’m also curious of the changes in the original characters. In this version of the Walking Dead Universe, I wonder what is going to happen to the Shane, Rick, Lori triangle. It’s full of lies! Pointy pointy triangle lies! It was less of a nuisance in the comic because… You know what? Read it. I’m trying so hard not to ruin the surprise. I also want to know who they want to cast for Michonne.

I would be remiss to mention how friggin amazing the SFX makeup has been through the entire process. The contest to win a stagger-on role would have been one of the coolest things I could experience, alas I was unable to enter ANY of them. If I tried immediately after the show, the bandwidth was already eaten. If I tried when I got up, it was no longer open. That makes me sad. I would have loved to be involved with the show in some way.

Breakout Performances – I actually have three.

Norman Reedus – Daryl – I friggin love the addition of Dixon. It’s creepy how endearing Norman has made that ignorant, racist redneck. All of the characters have trials and tribulations to go through; I think that his character growth will be fascinating. Probably because I have NO idea what the writers will do with it. Dream job: Writing a scene for an episode having to do with a little bit of awareness being dropped on Dixon. (and hugging Robert Kirkman. Not really a job, more of a perk) 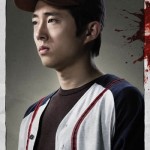 Steven Yeun – Glenn – Truthfully, I didn’t really like him in the comics for a very long time. He was very whiny and I was almost sure at the flip of every page he would be ganked by some skull nommer. Very emo. It took an event that has yet to happen in the show to turn me to Team Glenn. Yeun tackles the dialogue with a sardonic wit that is so deliciously bitter it’s like he’s my morning coffee. It is refreshing to see him a different way. I’m glad that Yeun was able to turn me around. 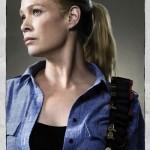 Lori Holden – Andrea – At first, I didn’t think I was going to like her. She was very cookie cutter. She felt like just a background player. I could NOT have been more wrong. During the “Vatos” episode, she had me straight out bawling. Ugly bawling. Red face, bogies, hiccupping and I felt raw and broken when I finally calmed down. That rarely ever happens to me. Sure I’ll sniffle or wipe a tear away. You know why my reaction was so strong? She didn’t hold back. She didn’t “cry prettier”. Andrea was a mess, and she sure as hell had good reason for it. I have to give Lori tremendous props for putting herself out there like she did.

So now, it’s December… The six episode first season has come to a conclusion. I really hope that they don’t actually wait until October to start the second season. As it is, I’ll be waiting impatiently for the DVD set. OH! And the “decontaminate dance” better be on the special features… along with a zombie. Or an anime style plush Daryl doll complete with sash of squirrels. Or an army of undead squirrels. You know. Whatever’s cost-effective.

Anyone that frequents my site knows that this year I have taken to just posting the doodles that I normally would use for write ups. Some seem to enjoy em. If you want to check out the “Reviewdles”, they are here. Once I upload the ones for Episodes 5 & 6 I will post em.