This is the hypnotic Charlie in a Bathrobe bit. Wanna know which one of his videos it's from? Go watch them all before you ask me.

On Wednesday Charlie McDonnell, admittedly my favorite youtube video-blogger (yes I find him adorable), waxed philosophic on file sharing and the benefits/detriments of illegal sharing. Check out his site to see the video, but wait a second!

I’m curious as to your opinions on the matter. Leave a comment with your opinion then head over to the site and watch Charlie’s.

Also, Charlie has just released his very first album! Yay Charlie! Be sure to follow the links on his page, have a listen and then buy it if you like it! 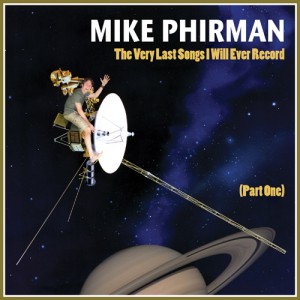 Anyone that knows me knows that I have a major lady boner for all things comedy. Laughing about life is a fun and easy way to deal with what comes at you. I surround myself with funny people and when I’m alone, I fill my earholes with sweet sweet comedy recordings. When I was in highschool, most teens were hellbent on going to a rock concert or tour. I was the girl that had to find the closest comedy venue to laugh my face off.

For those of you that follow me regularly on Twitter, you know that I have a major nerd crush on the Nerdist, aka Chris Hardwick aka “Hard” of the geek rock comedy duo Hard’N’Phirm.

This review is going to focus on the Yin to Hardwick’s Yang, the Duke to his Nukem, the jelly to his peanut butter, the guitar to his melodica, the duck to his goose – “Phirm” aka Mike Phirman.

On May 17th, Phirm  released his debut solo album “The Very Last Songs I Will Ever Record (Part 1)”.

If the title hasn’t made you laugh yet… I can wait… … There we go.

On the album, Mike wrote and played all of the instruments on all but two of the tracks. Those two are musicless and are there to teach you valuable phrases in Spanish. Beginners Spanish (Sec. 13) is especially necessary when preparing for the inevitable future.

The lyrics in all of his songs are intense and thought provoking. Take a look at one of the complex songs that he must have spent years writing.

Brings a tear to your eye, right?

In the age of music at the click of a button, it is rare for me to say that I will intentionally sit through an entire album. I will listen to this 13-track hug from Mike and wish I could hug it back.

Do yourself a favor, go to Mike Phirman’s website and download the album. There is no minimum payment required, but it goes straight to Phirm’s pocket and not to a record company. So toss some monies his way!

Oh! Did I mention there is a very familiar voice that is easy to recognize? Here’s a hint: He wears Hawaiian shirts, though I don’t think he’s ever performed in Hawaii.