I am almost positive that I am going to get some flack for this, but I used to be a Dane Cook fan. That is not indicating that I hate him now or anything, I just don’t follow his career anymore. I can still listen to his old albums and giggle occasionally. I don’t despise his current standup (I don’t think). I’ve heard about the issues with one of his recent sessions on the stage. His comments on getting over a girlfriend, to me, are less offensive than Teefury deciding to make a “female artist week” when they don’t make a habit of singling out a specific gender.

I digress. When I was younger, I thought it would be super cool to get a SUFI tattoo. So I did. 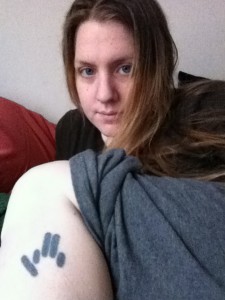 One of my biggest issues with looking at this tattoo and seeing it wasn’t regret. It was more apathy than anything else. It was a fun while it lasted, but I didn’t feel anything towards it anymore.

This will probably piss off my parents, but I decided to take a small chunk of my tax return (State, and I didn’t use it all so it was a very cheap present to myself) and get a tattoo. I just wanted to cover the tattoo with something that I have loved since childhood. My body has changed so much in the past few years, I thoroughly enjoy decorating it with lovely things. Also it was getting super faded and I didn’t want to get it freshened when I didn’t really care about it as much.

So I got something to remind me of both my love for the macabre, and the car I used to have that I named after one of my favorite characters.

I walked into a parlor today and after talking to Dustin and taking a look at his portfolio, it was set in motion. As the needles vibrated against my skin I knew that I was doing the right thing (for me). As he inked over the scar tissue of the old tattoo I winced, because tattooing over scars is ridiculously painful. But I soldiered through. Pain is something that I am used to. It’s something that I used to revel in.

I saw the tattoo slowly fill in and couldn’t stop smiling.

So here it is, the newest addition to my body. I couldn’t be happier.

I am the shadow on the moon at night.