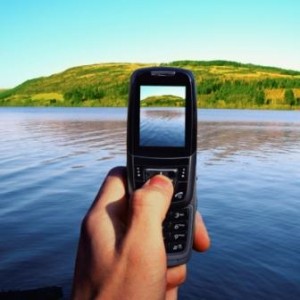 Why would you want to look through something so tiny when you have ALL THE THINGS behind it?

I realize that this back and forth banter has been played to death for the past 26 hours, but I wanted to weigh in as a fan of going to live comedy shows.

Just to give you a little bit of background, last night Patton Oswalt RT’d a very negative blog about one of his free performances and his perceived attitude about being filmed while working out new material. He posted a reply this morning that told his side of the story.

No, I’m not famous. I have had my share of time on stage and love doing it because of the amazing feeling of terror mixed with elation. It is the biggest adrenaline rush to step unto an elevated, illuminated area meant to pull people’s attention to you. It is absolutely envigorating to HEAR a person’s response or SEE a grin or shaking shoulders through the dimly lit crowd. THAT is encouraging.

Seeing a jarring flash or a red light is distracting. When someone is on stage, they aren’t just winging the entire thing. Yes, there can be moments of tangents, but for the most part, jokes are worked on outside of a venue and honed on the stage. When they hit that joke and feel the rush that comes with the flush of adrenaline it is a glorious thing. If adrenaline had a voice it would be whispering sexily “Yes. Yes, that is how I’m going to perform that part from now on.” Each time the bit is performed, the words adjust and new jolts pass over the performer.

The benefit of doing live shows that are not being recorded is that it is okay to have a moment where you tank. The brain of a performer takes that into account like a chef would take a slight taste of something, realized it needed more sugar and adjusted accordingly. Having material recorded can be incredibly nerve-wracking. The only thing that helps is knowing EXACTLY how you’re performing something and having a professional tape it.

Here is how I see it as a viewer:

I was not at the performance, but I would like to speak for many people that go to comedy shows and are forced to witness shit like this. Let me just come out and say it.

People? Put your fucking cellphones away.

While you think that you are getting something amazing to look at later or you have the morbid desire to set a performer off and get some great material to hopefully send to a stupid fucking tabloid, there are tons of people behind you. We are trying to enjoy the show that is feet from us but we’re being distracted by the glow from your stupid iPhone with the hipster cover that looks like a cassette tape with a mustache on it.

You spend your entire day with your eyes focused on the display of your phone, watching amateur videos with poor sound and people singing in the background to some band I can’t even be bothered to think of right now.

But hey there little trooper, guess what? You are ACTUALLY at a show! Put your camera/phone away and just ENJOY it. The memory of the performance will be so much better when you can actually watch it. Looking through a tiny frame is just ridiculous.

As for Patton’s reaction:

Patton could’ve called the woman a daft hairy cow’s cunt and I would still agree with his position. Being at a live comedy show and watching it through your shitty iPhone instead of being in the moment is fucking stupid. The fact that the women “offered to stop and delete it” shouldn’t have even happened to begin with.

If I ever have a comedy club, I fucking promise any performer that as soon as a screen lights up in the crowd that person will be asked to leave. Think Alamo drafthouse, but we’ll turn the house lights up so EVERYONE can see who is interrupting the performance. Would the Met allow you to film La Traviata? You might think that it’s a different level of performance, and that makes you an elitist asshole.

There were hundreds of replies in varying opinions. People claimed that Patton’s behavior was inappropriate and should have stopped after the woman acquiesced and stopped filming.

Why? Patton was being human. Being human may not excuse bad behavior, but it does explain it.

As a general audience, people tend to forget that those we admire also have the same ability to react to situations that we do. Granted, I have never seen Oswalt tweet “No black and white cookies at the bakery, FML!” so he tends to keep a lot of his emotions from the internet. With the ability to immediately tweet something terrible or write an elaborate blog post about how a night was uncomfortable for you because it was horrible for someone else, I think that the restraint that a lot of comedians possess is admirable.

Wow. I haven’t ranted in awhile. Missed it.