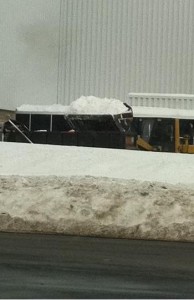 Filling a Trash Receptacle. Where is it going to?

Yesterday, my friend Margot posted this note on her facebook page.

I have seen way too many “well here it is (65, 70, 75) degrees” posts in response to posts about the huge amount of snow we are getting. For future reference, getting this much snow this quickly can be compared to any other natural disaster. Businesses lose money, people’s homes are damaged, roads are closed down, etc. Since we would not post “oh it is nice and safe and dry here” in response to a hurrican or a tornado, maybe you need to adjust your responses to our snow storms/blizzards!

Do you get it now folks?

For the first few storms, my response to people complaining about the snow is “If you cannot handle New England whether, perhaps you shouldn’t be fucking living in New England.”

The last few days I have been ill and yesterday I spent a few hours watching the news. The amount of reports of roofs collapsing immediately made me feel guilty for laughing at the dude shoveling his roof last Saturday. Connecticut has been fairly lucky with the incidences of roofs collapsing and not harming anyone. 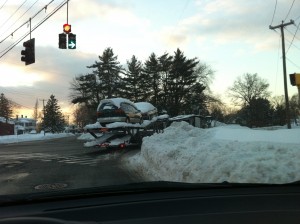 However, there have been many calls for assistance from someone stuck in snowbanks and multiple reports every morning of a storm where eighteen wheelers have jackknifed and have taken out use of one side of a highway.

Someone almost died because he was stuck in a bank during the snowfall and his windpipe was covered. He suffered poisoning from the emissions that were fed back into his car. Luckily, a stranger passing by saw his unconscious form and broke his window to yank him out of the car. If we don’t diligently keep our exhaust pipes clear on the side of our house, we are going to suffer a similar fate.

I know what the general response is. “If it’s bad out, don’t drive anywhere.” Unfortunately, not all of us are offered that luxury. If a State of Emergency is declared for CT and I do not make it into work, my vacation time is eaten up and there is the possibility of a written warning. I know several people that work for the power and cable companies and if they do not make it in to work it is an immediate writeup/termination. EVEN when there is 18 inches of snow on the ground. 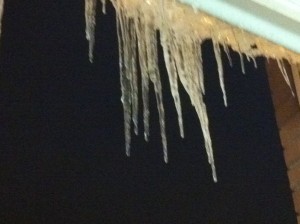 Even after the snow has finished falling, we are talking about 5-6 foot piles of snow that block our vision when we are driving. My brother and I like to call taking left turns a winter guessing game because we have no idea if someone is about to T-bone our cars.

What those of you not plagued by immense snow fall fail to realize, we have NO PLANS on how to get rid of all of this extra snow before the thaw comes. Will all of the snow melt fast enough to allow for the first wave of farming? Are we going to turn into wetlands?

If your foundation cracked from a frost heave, you are going to have to deal with both flooding and structural damage. If your roof collapsed, you are going to be paying through your nose to get your home back in shape.

I’m going to quote a Twitter account I found called @DearFuckface (Awesome name. Totally jealous.)
“To people posting sunny pics for those snowed in: Next earthquake, I’ll post video of my house not shaking.”

We have had enough. We have overspent our weather budgets for plowing our roads (resulting in roads not being cleared until 5-6pm in the evening). We have thrown out our backs with shovels. We have bruised ourselves from the deceptive black ice. We have had our cars towed. We have had to pay $3.59 a gallon to fill our snowblowers. We have WORN OUT our snowblowers.

We need help and I don’t know why our Governer has not asked for disaster relief from the government. Just because it’s white and pretty doesn’t mean that it’s safe. It is only safe if you stay in your house.

But then you might see twin girls asking you to play with them and might chase after your family with a hatchet. Just saying.

Oh. And one more thing.